Non-Resident Nepali Association (NRNA) was established with the purpose of uniting and binding the Nepali Diaspora under one umbrella on 11 October, 2003. In the course of completing 8 years of its existence NRNA has developed into a non-governmental global organization and a network of Nepali origin by establishing National Coordination Council (NCC) in 60 countries to represent its interests, concerns and commitments. Wherever we Nepalis may go or settle, whichever nationality we may possess, we never forget our land of origin, the land which holds our identity and soul. We rejoice in the achievement of our beloved country and her people and are disheartened by their sufferings and failures. Our belief:“Once a Nepali you always remain a Nepali”, is reinforced by our commitment to streamline our energy and resources for the transformation of the Nepali society. It is the duty and responsibility of every nation to promote, represent and safe guard the welfare of its nationals or people of its origin having foreign nationality and this will ultimately be in the interest of the nation. The national interest that can be fulfilled by the diasporas has not been hidden from the international arenas. The network of Nepali Diaspora represented by NRNA has developed itself into a formidable force that can represent Nepali interest globally. Keeping all these in mind, the Government of Nepal has given legal status to Nepali Diaspora by promulgating Non-Resident Nepali Act 2064. For practical purposes Nepali citizens living outside South Asian Association for Regional Cooperation (SAARC) member countries or People of Nepali Origin (PNO) holding foreign nationality other than SAARC nations are considered as NRNs.

Motto: « For Nepali by Nepali »

Objectives:
The objective of NRNA is to unite and bring Nepali residing all over the world under one umbrella; protect and promote their interest in and outside Nepal and utilize their potentials and resources for the welfare of Nepal. To achieve these objectives the association shall conduct the following activities:
Promote and protect the rights and interest of Nepalis residing outside Nepal and to promote Nepal.
Coordination among Nepali communities and their organization to establish a global network and a common platform to represent the
Nepali Diaspora.
Mobilize the knowledge, skills, capital and other resources in the disposal of NRNs for the socio-economic development of Nepal in
coordination and partnership with the government, national and international institutions.
Preserve and promote Nepali culture and tourism globally.
Act as a catalyst in attracting and facilitating NRNs and foreign direct investment in Nepal.

Functions:
Organizes global and regional conferences and interaction programs for its stakeholders.

Acts as a forum for the promotion and protection of the interests of the NRN community both in Nepal and abroad.
Download – NRNA Brochure 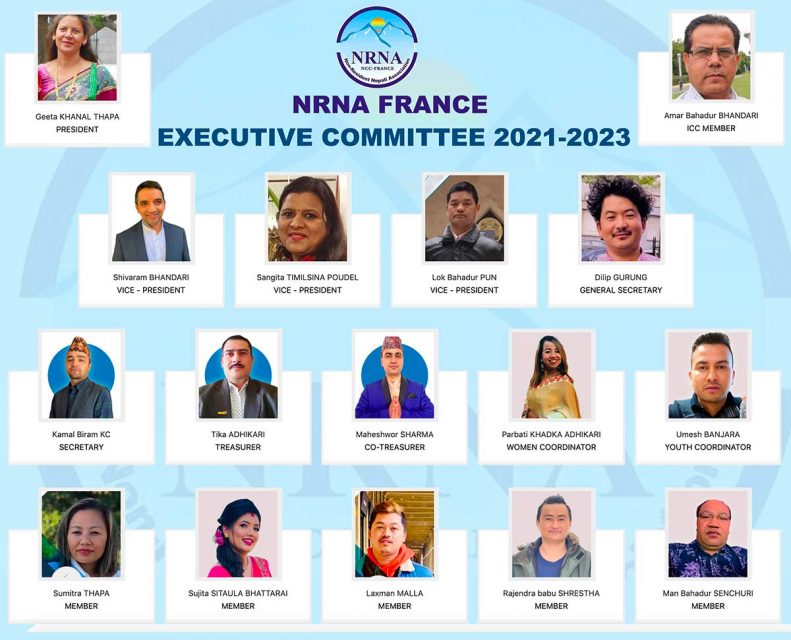